Brollies & Parasols were very proud to sponsor a local Halloween party, Fab-BOO-Lous Family afternoon, this weekend in aid of the very worthy cause, Save The Children Child Refugee Appeal.  Aimed at toddlers and young children with their families. The event had a spooky Halloween party hosted by child entertainers Party Fizz as well as apple bobbing, doughnut dunking, glitter tattoos, cake decorating and batty arts and crafts.  There was also a raffle for the adults with great prizes. From Queen’s Club, local restaurants, spa treatments and of course lots of umbrellas!

Save The Children is doing an amazing job with teams across Europe. Helping refugee children who are frightened, homeless and who have witnessed unspeakable horrors. Europe is facing its worst refugee crisis since the Second World War.

Since the start of the year:

For those who survive the treacherous journey, the terrifying ordeal is not over. Children often arrive in Europe scared and exhausted. Many have seen and experienced untold horrors during their journey. The physical impact of travelling is also clear. The children our teams have met have had severe sunburns and blisters from their journey. 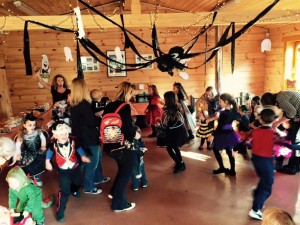 Brollies & Parasols sponsored the event and together with ticket sales, raffle tickets and refreshments during the afternoon the event raised over £600 for Save The Children.